It is April fools day and any article would have served its purpose after all the McCanns are taking people for fools. I have chosen this one because of the reasons the 'deadly duo' have found over the years to be 'unhelpful' in the search for Madeleine. Here, being arguidos 'hindered' the search...the releasing of the PJ files was ' unhelpful'... Dr.Amarals book they inisted, if people thought Madeleine was dead would no longer continue to search when what they really meant 'the fools' would stop sending them noney.

For the past eight months, Gerry and Kate McCann have been treated as suspects over Madeleine's disappearance. On the website findmadeleine.com Gerry McCann has written a blog that gives an insight into their experiences. 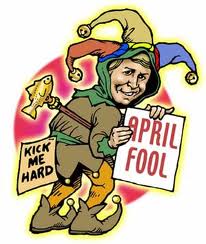 In his first posting after they were declared arguidos, McCann said the experience was "unbelievably stressful and emotionally draining".
He wrote: "We have absolute confidence that, when all of the facts are presented together, we will be able to demonstrate we played absolutely no part in Madeleine's abduction."

After the couple returned to their home in Leicestershire, in an entry at the end of September McCann said Madeleine's younger siblings, Sean and Amelie, were settling in well but miss their sister. "We talk about her every day," he wrote.
In the new year he expressed disappointment that the arguido status remained. "We feel this uncertainty hinders the most important thing: searching for Madeleine," he wrote.
At the end of March the McCanns visited the National Centre for Missing and Exploited Children in the US and wrote that they were "very encouraged" to hear that, in NCMEC's experience, the younger the child at the time of abduction the less likely that child will be seriously harmed.
In June he said information had been coming via a new hotline set up by their team. "Every piece of information will be followed up," he promised.


COMMENT: We can see here where the McCanns found their mantra..."there is no evidence Madeleine has been seriously harmed.
Posted by SteelMagnolia at 1:08 AM