Is there anyone left the McCanns have not made use of. I had only realised now that David Beckham made a plea for Holly and Jessica..so the McCanns have an image of Madeleine in her 'sports shirt' just like the two girls...sometimes, it is so hard not to see this case as pre-meditated. 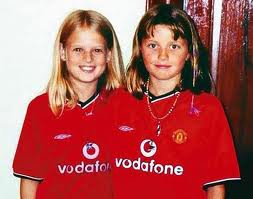 Beckham was joined by the rest of the Manchester United squad in making the appeal to Holly Wells and Jessica Chapman, who vanished from their homes in Soham, Cambridgeshire late on Sunday.
In a statement issued through PA News, Beckham said: "Please go home. You are not in any kind of trouble.

"Your parents love you deeply and want you back." Beckham is the favourite player of both Holly and Jessica.

The girls were wearing Manchester United replica shirts with Beckham's name and famous number 7 on the back when they were last seen.

The statement was issued jointly by Beckham and his Manchester United team mates.
A senior detective involved in the search for the two girls said police were "greatly appreciative" of Beckham's gesture.

"We appreciate him giving his time greatly as do the parents of Holly and Jessica, I have no doubt," said Detective Superintendent David Hankins.

"David Beckham and Manchester United have a tremendously high profile and an appeal from them may well have more impact with Jessica and Holly or with any of their friends.
"Anything of this nature can only help and we are very grateful."

The investigation into the girls' disappearance - one of the biggest missing person inquiries carried out in Cambridgeshire - was tonight focusing on a possible sighting eight miles from Soham.

Mother of three Tina-Marie Easey, 39, told police she saw two girls matching Holly and Jessica's description walking past her house at Little Thetford, Cambridgeshire at about 6.45am on Monday morning.

Mr Hankins said Mrs Easey's house was on the side of the A10 - the main road between Ely and Cambridge.

He said the girls seen by Mrs Easey must have been noticed by motorists.

And he urged anyone who thought they had seen the girls to come forward.

Mrs Easey said she saw the girls walking towards Cambridge as she drew her blinds and looked out of her window.

"They were definitely wearing Manchester United shirts," she said.


"They were quite small girls. They were smartly dressed and dry. I noticed the hair of one of them was blowing in the wind.
"They seemed to be larking about. The fair one was pushing the dark one.
"They seemed quite happy."

"You can never be 100% sure but the description matches the girls to a T," he said.

"If it was them, someone else must have seen them.

"The road would have been quite busy and I am surprised we have not had any more sightings.

"If the two girls were not Jessica and Holly then I would urge them to come forward straight away so we can rule out that line of inquiry and not waste time."

Police were today continuing to examine computers from the homes of Holly and Jessica.
Both girls are said to have enjoyed sending e-mails and police want to know if they arranged to meet anybody via the Internet.

She had the phone with her when she vanished but police have been unable to make contact with it.


Specialist search teams have been combing fields, hedgerows and outbuildings around Soham and Little Thetford throughout the day.
Police were also carrying out routine checks of dykes, rivers and ditches in the area and Mr Hankins said divers were on stand-by.

Earlier Holly's parents, Kevin, 38 and Nicola, 35, broke down when they appeared at a media conference to make further appeals for help tracing the children.

"It has been probably the worst night so far, last night," said Mr Wells.

"We have had experienced friends and family searching ditches and rivers and looking for shallow graves for our children.


"It doesn't get any more difficult than that."
Holly and Jessica went missing from their homes in Soham, a few miles from Little Thetford, at about 6.30pm on Sunday.
"We are particularly reassured as both seemed happy and were described to us by the lady as larking about," Mr Hankins said.

Holly's father Kevin Wells, 38, fought back tears as he described the search.

"We have had to experience friends and family searching ditches and rivers looking for shallow graves for our children. It doesn't get any more difficult than that," he said.
The area where the sighting was made is about 10 miles by road south west of Soham on the Ely to Cambridge road.

Mr Hankins said the possible sighting was reassuring, but he added: "Unfortunately we have had no information since then."


He renewed appeals to the public to come forward with any information.
"Did you see them? Please, please call the hotline immediately if you did. We need your help."