Gerry McCann:'Something In His Eyes Dead And Cold Like A Shark'.

Here we have someone who knew Gerry McCann, unusual as the powers that be have all but removed his past which therefore must be an interesting one. A non believer sensed the evil that dwelt within McCann even as a child.

Glasgow University product Gerry McCann is pressing for a review of Madeleine Case, why isn’t he asking for it to be reopened by Portuguese Police? 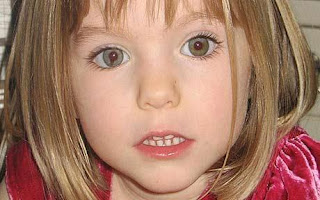 Glasgow University product Gerry McCann and his wife Kate McCann have written a letter to the Prime Minister David Cameron.

So far, the Tory Government has steered clear in the most part of the McCann Circus which the Labour Government inappropriately involved themselves beyond what reasonably be expected by Consulate Staff and Government.

If a review does take place this should be handled by the Portuguese Police.

Anyway I thought I would go through their letter and make a few points.

As a devoted father and family man, you know the importance of children. Our beloved eldest child, Madeleine, was abducted from Praia da Luz, Portugal, four years ago. Since then, we have devoted all our energies to ensuring her safe return”.

This statement begs the question, why on the night of her disappearance did they not join the search for her?

“we have devoted all our energies to ensuring her safe return”.

Mighty big of them since they are partly to blame for her unsafe exit!

“Today we are asking you – and the British and Portuguese governments – to help find Madeleine and bring her back to her loving family.

We live in hope that Madeleine will be found alive and returned to us. One call might be all that is needed to lead to Madeleine and her abductor”.

This is a continuation of their version which has raised doubts that she was kidnapped, and the theory that first emerged that the parents were to be considered suspects didn’t come from the Portuguese Police but from the British.

“To this end, we are seeking a joint INDEPENDENT, TRANSPARENT and COMPREHENSIVE review of ALL information held in relation to Madeleine’s disappearance. Thus far, there has been NO formal review of the material held by the police authorities – which is routine practice in most major unsolved crimes”.

What is the point of a review when they are not asking for a re-opening of the case?

“A key piece of the ‘jigsaw’ could easily have been overlooked and not joined up with another.

We have tried in vain to get the authorities in the UK and Portugal to play their part”.

Here the McCann’s put forward the theory that Police in both Britain and Portugal should be following their lead, it doesn’t work that way.

“But, sadly, our requests have seemingly fallen on deaf ears. It is simply not acceptable that they have, to all intents and purposes, given up on Madeleine”.

Talking of deaf ears, did Kate McCann’s hearing fail her during her 11 hour interview in which she refused to answer 48 questions posed by the Portuguese Police?

Did the McCann’s co-operate with the Portuguese Police to the fullest extent which a reasonable person could expect?

“I know you will share our concern that no law enforcement agency in the world is currently searching for Madeleine. Our small team of investigators is working alone. They do not have access to all the information gathered during the course of the investigation and have no statutory powers”.

This statement begs the question again why didn’t they ask for the case to be re-opened in Portugal?

“It is fundamental for any major incident that a case review is undertaken to identify all the avenues that could be explored that might lead to new information coming into the inquiry. The information in Madeleine’s case is not even held on one central, searchable database capable of linking data”.

Here we have an unjust criticism of the Portuguese Police Service.

“The benefits of pulling together different bits of evidence can be enormous but until this is done we cannot be sure what, if anything, has been missed. Four years may have passed but Madeleine is still findable. As we have said before we don’t want hollow, meaningless words”.

Have the McCann ‘investigators’ turned over their material to the Portuguese Police, have they turned up any real evidence of abduction?

“We want action. We want the authorities to help us. Madeleine’s abductor is still out there – other children may be at risk”.

Four years have passed and during that time the McCann’s could and should have made themselves available to the Portuguese Police and asked for the case to be re-opened.

“It is not good enough to just say it’s a Portuguese investigation”.

In order for this to be a cross border investigation then evidence would have to be presented that Madeleine crossed a border. So far, there is no evidence this has happened and no evidence that she entered Britain which would trigger a proper British investigation.

This is outside British Police Jurisdiction, it remains a Portuguese Police matter.

“It is not right that a young vulnerable British citizen has essentially been given up on. This remains an unsolved case of a missing child. Children are our most precious gift”.

Perhaps the McCann’s should take a long hard look in the mirror, they decided not to talk, not to help and by their actions were obstructive in the Police investigation.

“Children are our most precious gift”.

Which begs another question why did the McCann’s for five nights in a row abandoned 3 children under five years old in an apartment?

“Please don’t give up on Madeleine.

I think people would be more inclined to help if the McCann’s started to answer the 48 questions posed by the Police.

The McCann’s want a Police investigation which they can direct and control, someone should explain to them that will not happen by either the British or Portuguese Police.

I remember Gerry McCann from my time at Glasgow University, he was in the Hares and Hounds running club at The Stevenson Building; you would walk by him and immediately turn round and check him, something in his eyes, dead and cold like a shark.
I always got a bad feeling off him when I saw him.

As to Prime Minister David Cameron, I don’t think he and his government will make the same mistake Gordon Brown and the Labour Government made.

The facts remain the facts, and I would like to know why the McCann’s version of events didn’t stack up to some of the evidence in the case.

For example, why was Madeleine’s favourite toy Cuddlecat that Kate McCann said she took everywhere contaminated with a death scent?

Why didn’t Cuddlecat contaminate Madeleines’ bed when Madeleine was asleep and sweating?

Remember Kate McCann said that she had ‘the toy tightly in her arms as she did every night’.

Cuddlecat is in a static location with Madeleine sweating for several hours through-out the night and no contamination of the bed sheets and pillow.

Is it just me who finds that odd?

George Laird
The Campaign for Human Rights at Glasgow University