#McCann : #AylaReynolds - Another Missing From The Crib Story

Ayla Reynolds had a soft cast on her left arm when she was last seen, Massey said. 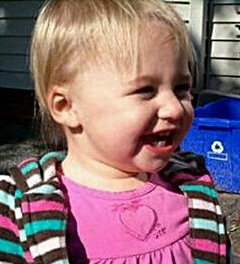 The broken arm, an injury Massy said she sustained about three weeks ago, is in a sling, according to a "Find Ayla Reynolds … " Facebook page that's been set up.
ABC News Consultant and former FBI agent Brad Garrett spoke on the case on "Good Morning America" Monday, saying that investigators are correct not to rule anyone out.
"You have to look at the immediate family … day care folks, all of those people , they're gonna need to check out," he said. "The key is elimination, or not."
http://abcnews.go.com/US/missing-maine-toddler-mother-sought-full-custody-day/story?id=15186552
Posted by SteelMagnolia at 12:55 PM