Someone saw me Gerry and me carrying a big black bag and acting suspiciously. This was absolute nonsense.

This is what is important in this article, not the dogs, the missing blue bag. We all know it exists or existed. Kate changes the colour to black and now includes herself with Gerry when seen with this bag. The Bag spotted the AFTERNOON before the alleged abduction so there would have been nothing suspicious about being seen with a blue sports bag. No one but no one said they were acting suspiciously. We now know the bag is of great importance.

http://www.thesun.co.uk/sol/homepage/news/maddie/article616714.ece
The SUN have removed their article on the missing blue bag.

Last updated at 19:03pm on 25th December 2007
Police want to trace a tennis bag allegedly taken from Kate and Gerry McCann’s apartment on the night Madeleine went missing, it was claimed yesterday.

Detectives think the blue holdall could have been used to carry Madeleine away, or even to transport her body.

It belonged to Mr McCann but has not been seen since the night of May 3, according to the Sky News documentary.

Tony Rogers, who reviews unsolved cases for British police and worked on the Soham investigation, said: “If it’s a bag of a size that could be used to take a child away from the flat, that would be of great interest to the investigating officer.”

But Mr McCann told friends yesterday that he did not take any tennis equipment to Praia da Luz, and did not own a blue tennis bag.

He said: “As far as Kate and Gerry are concerned, there is no missing tennis bag. They came back from holiday with everything except of course, tragically, Madeleine.”

Scroll down for more… Madeleine disappeared in Praia da Luz on May 3 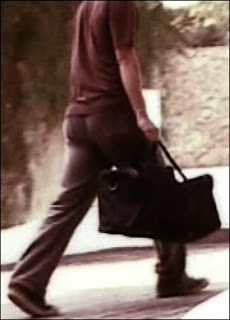 Sky News stood by its story, which it said came from sources who had travelled to the resort after Madeleine’s disappearance Police want to trace a blue tennis bag allegedly taken from Kate and Gerry McCann’s apartment on the night Madeleine went missing.
At the time of the disappearance maritime police told fishermen and boat owners to watch out for anything unusual they spotted in the sea around the coast, including any black bin liners which could have been thrown into the water containing potentially vital evidence.

Portuguese police worked for several months on the theory that Madeleine died in her parents’ holiday apartment and that her body was somehow transported to a hiding place after her death, but have been unable to find sufficient evidence to prove such a claim.

Forensic samples which they hoped would prove her body was transported in her parents’ Renault Scenic, hired 25 days after she went missing, proved inconclusive.
Her parents have always denied any involvement in her disappearance and Mr Mitchell called the theory “ridiculous”.
COMMENT; A note for Vanessa Allen..when you wish to delete your work to help protect those who have harmed Maddie, make sure you also have the cache removed.
Posted by SteelMagnolia at 11:26 PM