This is the concluding part of my three part review for the McCann Files. It will remain here for a short period until it is posted up on that site.
III Madeleine as a self-portrait of Kate McCann 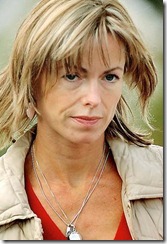 Reading Madeleine is a weird experience.
For a start – unless, of course, you are one of those “realists” who think the book is just the simple story of an unfairly traduced and long suffering mother – it operates at as many levels as a French symbolist poem. “Choose your audience and write to it,” say the agents in their guidance to celebrity clients but for Kate McCann this is no simple task. She knows how many people there are at her shoulder as she writes – Abreu, Amaral, her various police questioners in the PJ, Bob Small and Detective Sergeant de Freitas from the UK, David Payne, and others, all with their own knowledge of the events she describes.
She has the silent presence of her constituency of supporters to maintain as well, always searching for an approach that will keep them onside – did that sound too happy? Is my love for Madeleine coming across strongly enough? I mustn’t sound too vain – as well as the note-takers on the skeleton crew still keeping the case open at Leicester police headquarters. All of them must somehow be satisfied.
The major chord, as it were, of the surface Readers’ Digest narrative – the only one that will  be perceived by some of her less sensitive fans – dominates this series of undertones, one for each individual or constituency. It is a performance on a colossal  scale, a high-wire act that must be petrifying her husband, evidence of an overpowering ego and an immensely strong will.
The cultural poverty that she and her husband share and which makes them describe – and, I think, experience – situations of extreme elemental drama in cheap soap-opera terms makes one hesitate before admitting that Shakespeare frequently comes to mind. Yet the sheer power and determination with which she sent hope and strength coursing back into her husband’s limp, sobbing body on the night of September 6, for instance, is that of Lady Macbeth in its purest form. She is an extraordinary woman.
Whether she is quite sane, in the commonly understood sense of the word, is  another matter. When the PJ officers accused her of blacking out on May 3, of not being in control of her actions and feelings, they were, as I have written elsewhere, very close to the truth of what Kate McCann herself describes in Madeleine – months of believing that she was possessed by an alien force,  “a demon”, and an accompanying sense of seriously out-of-control fury, in other words psychotic, not neurotic, behaviour. But they clearly believed that such behaviour predated the evening of May 3.
Hers are qualities that inspire both admiration and pity. If only they were the whole story! For the record of the last four years shows a deeply unpleasant underside to her complex personality.  It is not the evidence she provides in the book of her obvious human weaknesses — vanity amounting to self-obsession, a tendency to attack, sometimes physically, those who provoke her,  an obvious pleasure  in being indulged associated with a certain financial acquisitiveness: most of us share some of those characteristics and worse. No, it is much more serious: few people mean anything to her at all and  those that cross her...
People who have helped or served her fare almost as badly as those who have given her trouble. The experienced GNR officers who first appeared on the scene to search for her daughter, less fortunate in their careers than she, men of peasant stock on a poor wage in a poor country,  are treated with casual contempt by this erstwhile child of the Liverpool slums: “Tweedledum and Tweedledee”, she describes them mockingly, “bewildered and out of their depth”.  The ghost of harmless old Mrs Fenn, who dared to be concerned for Madeleine’s  well-being,  is invoked to receive a paragraph of gratuitous insult before being despatched back to her grave; Justine McGuinness, having failed Kate McCann’s expectations in some obscure way, is tossed aside like a bunch of old flowers. 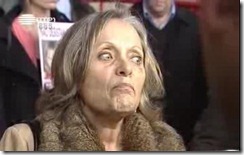 Such nice people, lawyers
Goncalo Amaral, of course,  stood squarely in her way. Having fed the UK rumour machine against him she watched, presumably with satisfaction, his career implode.  Once his book threatened to bring the facts of the investigation to a British public almost completely unaware of them, she set out not just to silence but to destroy him, using the crone Duarte and the wealth at her disposal — none of it earned — to tie him up in Kafkaesque legal netting, his money seized, his freedom of speech gone, his family dependent on friends for financial support. It was a ruthless desire to hurt, not to defend, that is so clearly revealed in her pursuit of Amaral and his family, a campaign that almost succeeded when the police officer’s  wife broke down and begged her husband to seek a settlement with the pair.
It is notable, by the way,  that Amaral’s memoirs  not only reveal a more cultivated individual than Kate McCann  — he actually shows awareness of the history and culture of his own country and an aesthetic appreciation of its landscape  — but a degree of humanity and warmth that is quite lacking in the icy heart at the centre of his adversary’s book. Unfortunately he is also less devious: he underestimated Kate McCann when she was almost within his power and he is still struggling to overcome his error. That side of her personal ledger is almost enough to cancel out the pity one should feel for such a disturbed woman.
This brings us to the last, and most extraordinary, aspect of Madeleine. It is a strange and troubling example of a divided self,  for while her fingers  tap out the repeated evasions and justifications  of the last four years, another part of her, through bravado, sickness, a damaged self or her fugitive Catholicism, is busy subverting her words from within.
“The style sings of hope,” wrote a famous critic of the troubled author F Scott Fitzgerald’s novels, “the message is despair.” And something similar is happening throughout Madeleine. Kate McCann cannot bear to portray her daughter in the days before the child met her fate: she can only approach  her with displaced memories from an earlier time as though, whenever she makes the attempt,  she sees her own child’s face staring steadily back at her and she has to turn away.
She makes only a lacklustre effort at assembling a convincing narrative of that week, falling back instead on old cuttings as though she no longer has the psychic energy to put forward a sustained and convincing description. The Tapas 7, her supposed friends, walk the streets and sands  of Praia da Luz like spectres, not real people. Her handling of the famous visit to her apartment by David Payne is riddled with fatalism. Only after 10PM on May 3 does the prose spring to agitated life— because now she is recalling real feelings of fear and turmoil. But whether those feelings resulted from the loss of her daughter to a stranger or something altogether more complicated but just as terrifying, is open to question.
There is fury – that word again – throughout her time in Portugal at what happens to her but it is as though she is shouting to convince herself. And when she turns to the events of August 2007 it is simply impossible to believe that she is really protesting her innocence; in the August 8 interview with the police and that dreadful episode in the apartment with Abreu and his assistant almost a month later, the truth breaks through once more and  the token claims that they were being invited to plead guilty to something they hadn’t done are simply overwhelmed by charged  images that scream of guilt, most of all the one in which Gerry McCann gives up and sobs at her lap like a child.
When Kate McCann writes of guilt — the guilt she admits  at not having protected the child, of the things she might have done differently,  the declarations ring empty, with no accompanying sense at all that she really feels, or perhaps even understands,  the true meaning of the  word. When  she writes of her own innocence, in contrast, the mood, the feel, the crucial scenes, deny her own words. The book is one long, unconscious, confession, a cry for help.
http://blacksmithbureau.blogspot.com/2011/07/madeleine-review.html
http://www.mccannfiles.com/id232.html
Posted by SteelMagnolia at 10:15 AM