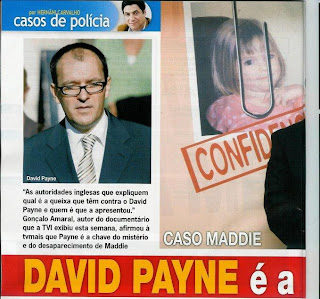 Dirty Des gets the message out there via Sean Hyland, not his words you understand but Sean's .  The police investigation concluded Maddie died in the apartment and the McCanns simulated an abduction...great shame the 'vile troll' did not get the paedophile allegations out there also....but maybe next time !


AN INTERNET troll warned over vile messages about Madeleine McCann’s parents last night boasted: “The only way to shut me up is to jail me or kill me.”


Sean Hyland, 50, was cautioned last year over hateful remarks he made about Kate and Gerry McCann and their spokesman.

But when we confronted him he vowed to carry on with his campaign of sick comments.

The steel worker insisted he was “no conspiracy nut” but he could face fresh police action if he continues with his messages.

He branded the dad-of-three “a defender of kiddie killers”, “a pathetic pervert”, “a prat” and doctors Kate and Gerry “quacks”.In one online message he threatened: “We’re not reactive, we’re proactive, we’re attacking you.”

And in another Hyland wrote: “I think the messages I left 4 Clarence Mitchell on his answerphone have rattled him.”

A McCann source said: “It is vile abuse, very upsetting for all concerned, and must be stopped. Thankfully, the police are now involved.”

Scotland Yard officers asked for help from colleagues in Humberside who cover the area where Hyland lives.

A Met spokesman said: “The matter was dealt with by way of a first instance harassment warning being served on the suspect a month later.

“As yet, no further action has been taken.”

A Humberside Police source said: “There has been a formal complaint and he has now been warned.”

But in the week Scotland Yard detectives reviewing the case claimed Madeleine might still be alive, Hyland continued his rantings.

He said: “I’m still convinced Clarence Mitchell is lying on behalf of Kate and Gerry McCann.

“My theory is the child died and her parents are involved in hiding her body and they are using the Government and taxpayers’ money to evade justice.

The McCanns repulse me, Clarence Mitchell is a liar and the only way to shut me up is to put me in jail or kill me.

“I’m not the sharpest knife in the block but I’m not the village idiot. I am no conspiracy nut.”

Kate, 44, and Gerry, 43, face the agonising fifth anniversary of their daughter’s disappearance from a holiday apartment in Praia da Luz, Portugal, on Thursday.

The couple, from Rothley, Leics, are convinced their daughter, who would be nine, is still alive.

Mr Mitchell said: “The matter is in the hands of the police and I cannot comment.”